How the LGBTQ+ Community Builds Resilience Through Activism

Their demand for civil rights led to the Stonewall riots, a social revolution that launched the beginning of the modern LGBTQ+ movement. 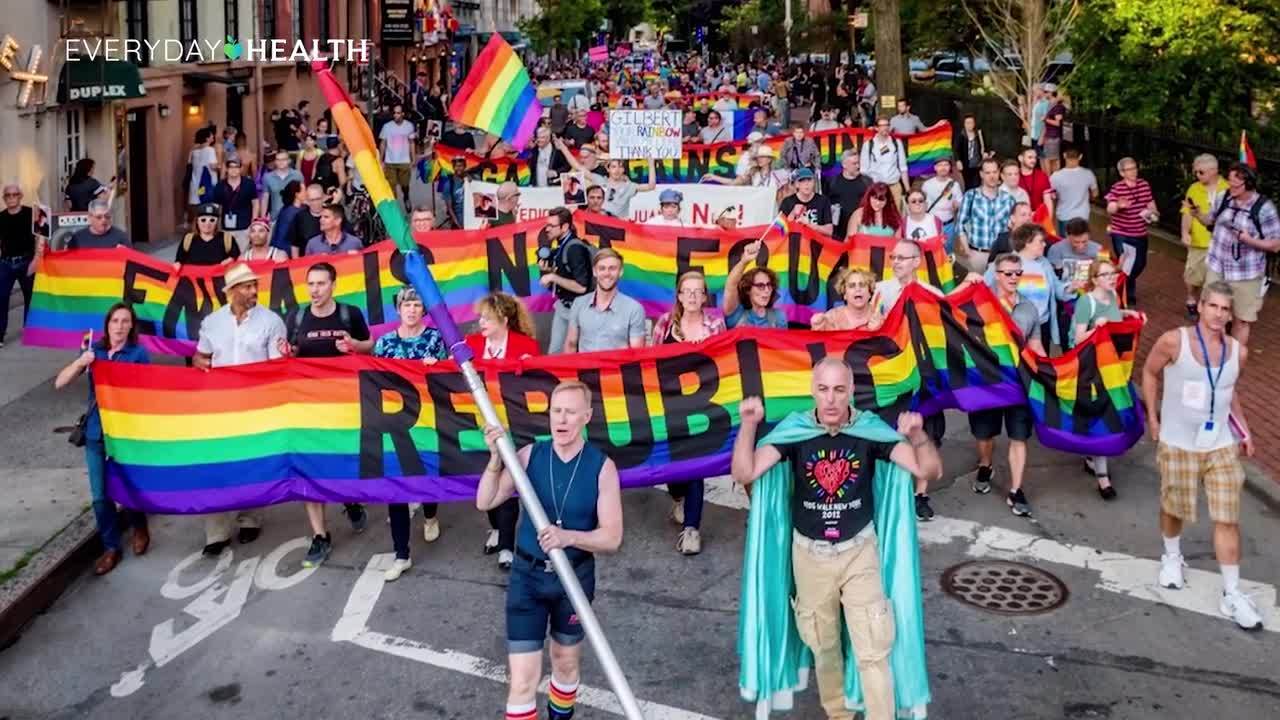 For LGBTQ+ and?HIV/AIDS?activist Ken Kidd, growing up gay in the 1960s in small-town Virginia? wasn't easy, he says. It was a time when homosexuality was classified as a mental disorder by the American Psychiatric Association, and aversion therapy — in which electroshock techniques were used to try to stamp out same-sex attraction by associating it with something negative, and thereby “cure” homosexuality — was a recent memory.

Ken Kidd knew he was gay from a young age, and even then, he recognized that made him different. He felt like he needed a place to fit in, and that meant leaving Virginia. So in the late 1970s, when he was in his early twenties, Kidd moved to New York City — the one place where people were out, and loudly fighting for the right to be themselves.

By that time, almost a decade after the Stonewall riots of 1969, the modern LGBTQ+ movement was in full force. Arriving in New York, Kidd remembers people telling him “yes” a lot, something he wasn’t accustomed to as a gay man at that time. "Yes, he could have an apartment." "Yes, he could have a credit card." "Yes, he could have a boyfriend." He landed a job at New York University, had a great group of friends, and was finally part of a community who accepted him for who he was. Life was good, until suddenly it wasn't.

Only a few years after Kidd arrived in New York, three men jumped him from behind as he was walking through Brooklyn Heights. They threw slurs with their punches and kicks, telling him he was worthless as they stomped on his face and chest. Kidd was left with a broken jaw,?broken ribs, and a ruptured blood vessel in his brain.

“Suddenly, this place that welcomed me with open arms told me I was nothing but a faggot and I deserved to die,” Kidd says.

The gay rights movement was making progress, but hate crimes against the LGBTQ+ community were still common at this time. Almost 40 years later, incidents like these persist. After the attack, something irrevocably changed in Kidd.?He had become, as he put it, “activated.”

“When you’re quite literally staring down your demise and you live through it, you sort of make sure you take action to continue living through it,” he says.

Overcoming Discrimination and Building Resilience in the LGBTQ+ Community

Even now, in a decade where same sex marriage is legal and hate crimes are not, discrimination is still a huge burden to bear for minorities like the LGBTQ+ community. In the 2017 report Discrimination in America: Experiences and Views of LGBTQ+ Americans, 90 percent of those surveyed felt LGBTQ+ people are discriminated against. Research from the American Psychological Association shows discrimination may be linked to chronic stress and poorer health outcomes, and it can also?prevent LGBTQ+ patients from seeking out healthcare?for fear of discrimination.

Mental illness is more than twice as common among LGBTQ+ adults compared with heterosexual adults, according to the 2015 National Survey on Drug Use and Health, and adults in the LGBTQ+ population are also at higher risk for suicide. The National Alliance on Mental Illness reports that LGBTQ+ high school students are five times more likely to attempt suicide, and suicidal thoughts among transgender adults are 12 times higher than the national average.

“Imagine growing up constantly getting messaging that part of your identity is bad or sinful — it’s hard to reconcile who you are when you’ve grown up with an identity that’s ‘wrong,’” says?Israel Martinez, a licensed clinical social worker and?LGBTQ+ therapist based in Montclair, New Jersey.

Martinez says there is a lot of fear in the LGBTQ+ community around being exposed. Being "outed" has the potential to lose family or friends who may not be accepting, and especially for LGBTQ+ youth, coming out may lead to bullying and feelings of isolation, he says. That's why being part of a community and having a sense of belonging is so important: it's how people build resilience, Martinez?says.

“It’s very encouraging and empowering for people to see how strong they can be in a strong community," he says.

An Era of Change: How the Stonewall Riots Started the Gay Rights Movement

In the early morning hours of June 28, 1969, the LGBTQ+ community collectively decided they had had enough. The Stonewall Inn — one of the only gay bars in New York City at the time — was raided yet again by police. But instead of remaining complacent about the harassment by police that happened time and time again, the group of drag queens, lesbians, gay men, transgender folks, and everyone else under the LGBTQ+ banner fought back, leading to what is famously known as the Stonewall riots, as well as the beginning of the modern LGBTQ+ movement.

The first ever Pride march (“It wasn’t a parade, it was a march,” Kidd says) took place one year later, and a few years after that, the APA finally issued a resolution that homosexuality was not a mental illness. Finally, the LGBTQ+ community was garnering some big wins. Then, HIV/AIDS hit — a disease that was initially labeled GRID (gay-related immune deficiency).

Kidd was still recovering from the traumatic assault, and now suddenly, his friends were starting to get sick, and they were starting to die. The Reagan administration seemed to be ignoring (or making jokes about) what they called “the gay plague,” a pandemic that has to date killed around 35 million people worldwide, according to the World Health Organization.

Kidd joined ACT UP (AIDS Coalition to Unleash Power), a group of revolutionaries demanding civil rights for the LGBTQ+ community. They held demonstrations, waving posters with the now iconic pink triangle on a black backdrop with the words “Silence=Death” to draw public attention to the government’s poor response to the crippling health crisis. United in anger, per ACT UP's?slogan, the LGBTQ+ community was making change happen.

By this time, the rainbow flag — designed by the artist and gay rights activist Gilbert Baker — had become an international symbol of Pride and hope. Where a rainbow flag flew, so did acceptance. Because of groups like ACT UP and Queer Nation, both of which Kidd was involved in, hate crime legislation finally passed in 1993. Just over 20 years later, in 2015, same-sex marriage was legalized in the United States.

“You can’t fight unless you’re a little bit angry,” Kidd says. “To get anger from all sides, to have literal hatred flung at you, and be able to bounce back from that? That’s the epitome of resilience.”

Today, Kidd works as the director of special projects and events at the NYU College of Arts and Science. At age 61, he’s still an active force in the LGBTQ+ community. In 2017, Kidd helped push to get the first permanent Pride flag raised on federal land overlooking the Stonewall National Monument, a national park in Greenwich Village designated by?Barack Obama during his presidency. A?study published in September 2018 in the American Journal of Men’s Health found that actively combating discrimination through “building and sustaining networks” is essential to developing resiliency in middle-aged and older gay men, a demographic that has experienced extreme health disparities. That’s exactly what Kidd has done, and he is proud of it.

“It’s an amazing thing to embrace what you’ve been told is the worst thing about you and turn it into the strongest aspect of your life,” he says. “That’s power, my friend.”

How You Can Be an Ally and Support the LGBTQ+ Community

While things have gotten markedly better, the LGBTQ+ community still has to deal with discrimination, hate crimes, and high levels of mental health issues. Today, only 18 states have bans against “gay conversion therapy,” according to the Movement Advancement Project, and in places like Japan, transgender people have to endure procedures like sterilization just to have their gender identity legally recognized.?John Carroll, an LGBTQ+ therapist at the Institute for Human Identity (IHI) Therapy Center in New York City, says that since the 2016 election, there has been a considerable spike in people seeking IHI’s services.

Carroll says resiliency isn’t just something people have; it's something a person has to actively develop. While community, therapy, and self-love are all factors in building resilience, he says how those outside the LGBTQ+ community treat those within also plays a key role. LGBTQ+ allies and supporters need to practice cultural competence just as they would for any friend of a different race, a different culture, or with a different viewpoint.

“You don’t need a degree to practice active listening and empathy,” Carroll says. “Being an ally can start with treating others with dignity and respect, and being willing to listen to others’?experiences.”

Here are some tips from Carroll and the Human Rights Campaign on how you can be an ally:

The Latest in Emotional Health

Sesame can connect you to a whole health team through its virtual platform. We reviewed Sesame Care to detail its services, costs, and membership perks...

Which is better: Talkspace or BetterHelp? That depends on what you’re looking for. We’ve reviewed the costs, services, and plans of each online therapy...

Our Review of Calmerry Online Therapy

Calmerry is an online therapy company that offers plans with unlimited messaging and live video therapy sessions. Every subscription includes access to...

With online cognitive behavioral therapy (CBT), there’s no need to see a therapist in person to get the mental health support you need. We review the ...

What Makes Someone an Expert in Mental Health Coaching?

What Makes Someone an Expert in Mental Health?

Cerebral has been in the news for how it delivers its mental health services. We explored the platform to find out what users can expect.

Talkspace gives users the freedom to meet virtually with a therapist when it’s convenient for them. Choose from online chatting, video, or voice messaging...

Teencounseling.com: Reviews and Costs in 2022

Our reviews team looked at Teen Counseling to determine how the provider could work for parents and their teens. See what types of therapy this platform...

Addressing Health Disparities One Haircut at a Time